In alignment with the #ReadWomen movement, this course, offered in English and taught by Professor Kathryn Sánchez, is a celebration of some of the most engaging women writers from Brazil.

The course aims to introduce students to selected works by contemporary Brazilian women writers and film directors with an emphasis on the complex web interconnecting representations of nationality, race, class, ethnicity, gender, and sexualities. Readings will include a variety of different forms of writing such as poetry, short stories, five novels, and chronicle and journalistic texts in constant dialog with popular and contemporary film constructions of Brazil and its people. A significant part of the course will be dedicated to the fascinating existentialist and experimental work of Clarice Lispector.

No prior knowledge of Brazil is needed, and background information will be provided throughout the course to give students the tools necessary for understanding Brazil and the representation of women through these chosen texts and films.

In-class discussions will be held on Mondays and Wednesdays. Friday classes are online at the students’ convenience with films available for home streaming.

Evaristo, Conceição. Ponciá Vicencio.
Felinto, Marilene. The Women of Tijucopapo
Lisboa, Adriana. Symphony in White
Lispector, Clarice. The Hour of the Star &
The Passion According to G. H.
Pereira, Djaimila. That Hair

This is course is catered to students who grew up in a primarily Spanish-speaking home or community, and, as a result, speak and/or understand the language. It is also designed for students who feel a cultural connection to Spanish through their childhood and who have worked on their proficiency through prior coursework. The course provides a comfortable setting for students to increase their level of confidence in speaking, listening, reading, and writing Spanish, and enhances their linguistic repertoire in each of these realms.

We accomplish this by leveraging, valuing, and honoring pre-existing skills with the language coming from any variety or varieties of Spanish. We also place emphasis on the cultural background of individual students, and share experiences so as to gain knowledge about the richness of diversity across Spanish-speaking communities. Through the approach described here, a main goal of the course is to promote a reaffirmation of students’ pride with respect to their heritage language and culture.

Spanish 319
On Translating Cultures and Disciplines

This course, offered by Dr. Sarli E. Mercado, focuses on further developing students’ knowledge of Spanish through an introduction to the practice of translation of texts from different disciplines. We will draw texts from journalism, literary studies, urban and gender studies, public health and environmental cultural studies, religious, legal, and ethnic studies in order to discuss the ideas, topics, and issues on language or current events they present while using translation (into English or Spanish) as a deeper reading in both individual or group projects. By considering the meaning and subsequent practice of translation, students will also learn that it is not mainly a simple substitution of one word for another in a different language or merely an exercise of capturing the sense of a phrase, rather, the course will demonstrate that translation is a complex process of moving from “original” to “copy” and that in fact it involves traveling between cultures.

With an intensive oral and written practice, the course includes a review of important grammatical points, as well as the acquisition of useful concepts and key vocabulary from different disciplines. Theoretical approaches to translations will also be introduced — including the ideas from scholar and theorists such as JL Borges, Lawrence Venuti, George Steiner, and Ezra Pound, among others — in order to consider a wider concept of translation. In other words, students will leave the course knowing about the various ways in which translations of texts have also been responsible for much of the communication not only among disciplines but mainly between peoples and cultures. Finally, the course includes the opportunity to participate in translation workshops conducted by invited guest writers and translators of the 4W – Living Poetry: Women in Translation Workshop and to create a bilingual Cartonera Book as a final group project.

This course, taught by Professor Rajiv Rao, builds upon the knowledge of sound classifications obtained in Spanish 320 by connecting the topics discussed there with concrete physical speech signals.

We will learn to detect vocal fold vibration, evidence of tongue position, degree of closure between two organs, and friction caused by organ configuration, among other features, through the use of specialized software called Praat© (free download – this tool is currently used in many industries and knowing how to use it is a practical skill you can add to your résumé), and will also discuss sound experimental designs.

We will identify a specific set of sound system challenges that speakers of English face when learning Spanish. With regard to all of these issues, we will discuss address perception and production data, and data coming from native speakers and/or second language learners (that you collect from your own social network – that is, you will be researchers and your friends and family will be your participants!). Comparisons between Spanish data and those of English and other Romance languages will be made throughout the course.

This course, taught by Professor Paola Hernández, takes into consideration the various meanings of the word “border” or “frontera”. What is a border, geographically speaking? What does it mean in political and legal terms? How do we conceive the border in cultural, literary, linguistic, political, judicial, and personal ways? What is like to live on the border or on the margins? It is said that the border is a contact zone, a meeting point, a way to transfer and share information, an invitation to (in)tolerance and ex/inclusion. We will read texts both in English and Spanish from history, politics, cultural anthropology, literature, and theatre and performance to grasp the vast understanding of what is life on the border. All instruction and discussion will be in Spanish.

Theory and Practice of Hispanic Theatre

Trans-Atlantic perspective of Baroque theater: reading, understanding, and performing theatre from the seventeenth to the twenty-first centuries, with stage practice. 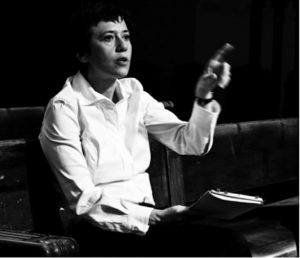 This course, available to both undergraduate and graduate students, will be taught by the internationally-renowned theatre director Professor Nuria Alkorta, PhD. Professor Alkorta has taught at Harvard University and is tenured at the Real Escuela Superior de Arte Dramático in Madrid. She comes to UW-Madison with a Tinker Fellowship through Latin American, Iberian, and Caribbean Studies (LACIS) for the spring semester of 2020.

Have you ever wondered how a play is staged or how to find a place to put theory into practice? Even if you have no experience acting or creating costumes, this class invites you to explore the artistic side of yourself! The course will be centered on a variety of plays from the Spanish and Spanish American Baroque period, combining theoretical and practical aspects of staging. This is not, however, a course with two separate parts, but rather a unified inquiry into a range of texts from the perspective of theatrical performance. The final result will be a public performance on the part of the students of a full-length Spanish American play directed by the Professor.

We will study the use of different metrical, rhetorical and musical forms, stage directions, and costume, etc., analyzing the motives and purposes of each of the author’s choices, and we will try out their effectiveness on stage. Set, lights, costume designs, production, and direction will be part of this collective endeavor and each student will assume an active role in the performance (acting is not necessary). Students with interests in music, crafts, and design can help explore theatre through the live performance. The end project is to perform in front of a live audience. Class and performance are in Spanish.

We will also evaluate the modernity of texts as well as their ability to appeal to American audiences in our own times, and we will look into the role that scholars, directors, actors, and theatre professionals in the 21st century play in this.

The choice of dramatic material and its staging for much of the course will depend on the group of students. In any event, work performed at the end of the course will be a full-length play from the Spanish American Colonial period, most likely a comedy by the great Mexican dramatist and poet Sor Juana Inés de la Cruz.

Find these and all other Spanish and Portuguese course offerings in the UW-Madison Course Search & Enroll!