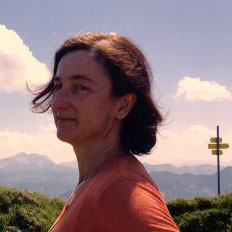 Kata Beilin is a professor in the Department of Spanish & Portuguese, and affiliated with the Latin American, Caribbean, and Iberian Studies (LACIS) program, the Nelson Institute for Environmental Studies, the Center for Culture, History, and Environment (CHE), and the Holtz Center for Science and Technology Studies at the University of Wisconsin-Madison.

Kata’s research spans the Iberian Peninsula and Latin America with a focus on environmental issues, alternative economies, time and memory, and indigenous epistemologies. Together with other Environmental Humanities scholars, she has launched an Environmental Cultural Studies platform that has produced interdisciplinary research and sparked debates published in three recent volumes that she has co-edited Ethics of Life; Contemporary Iberian Debates (Vanderbilt University Press, 2016), Polemical Companion to Ethics of Life (2016), and Environmental Cultural Studies Through Time in Luso-Hispanic World (forthcoming). She is ready to mentor students working on Spanish modern literature, culture, and film as well as environmentally focused Latin Americanists.

Her current projects include:

All that Matters; From the Iberian Crises to Alternative Economies of Life focuses on how the 2008 economic crisis has revealed an exhaustion of human relationships with material environments and how these relations are transformed by alternative cultures and economies.

Interspecies; Resistance and Resurgence in Hispanic Rural Cultures (in collaboration with Science & Technology Studies scholar, Sainath Suryanarayanan) examines the scenarios where cultural resistance to industrial agriculture in Latin America is motivated by the awareness of threats for the plants, animals, forests, and waters that people not only rely upon in their daily lives, but that they consider as their partners, and that form part of their identities.

2012 Institute for Research in the Humanities Resident Fellowship, UW-Madison.

“Step out to Shadowtime, Hurry Like a Plant: Corporal Time and Corporate Time for the Anthropocene Generation” with Sainath Suryanarayanan. Transmodernity: Journal of Peripheral Cultural Production in the Luso-Hispanic World 2,6, (2016): 21- 42.

“The War Between Amaranth and Soy: Interspecies Resistance to Transgenic Soy Agriculture in Argentina.” with Sainath Suryanarayanan. Environmental Humanities 9,2, Nov, 2017: 204-229.

“Culture and Torture; Debates on Bullfighting in the Times of War on Terror.” International Journal of Iberian Studies. 25.1, July 2012.