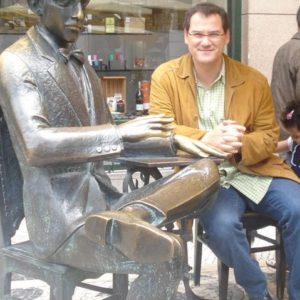 Juan F. Egea (Alicante, 1963) is a professor in the Department of Spanish & Portuguese at the University of Wisconsin-Madison, where he has taught since 1999. His primary area of research is Modern and Contemporary Spanish literature and culture. His academic interests include poetry, film, visual, and cultural studies.

His second book, Dark Laughter: Spanish Film, Comedy, and the Nation (University of Wisconsin, 2013), is an in-depth analysis of the dark comedy film genre in Spain, as well as a provocative critical engagement with the idea of national cinema, the visual dimension of cultural specificity, and the ethics of dark humor. It explores key works by Luis García Berlanga, Marco Ferreri, Fernando Fernán-Gomez, Luis Bunuel, Pedro Almodóvar, and Alex de la Iglesia. At its core, Dark Laughter is a substantial inquiry into the epistemology of comedy, the intricacies of visual modernity, and the relationship between cinema and a wider framework of representational practices.

His third book, Filmspanism: A Critical Companion to the Study of Spanish Cinema (Routledge, 2020), explores the geopolitics of knowledge involved in academic approaches to Spanish cinema. This companion rethinks the role of disciplinarity, institutionality, and nationality in the study of film by taking into account a rather specific set of contentious issues, intellectual traditions, discursive servitudes, and invested scholarship. To that end, the book explores the topics of art cinema, popular culture, film genre, and transnationalism, always with Spanish cinema as its concrete object of study.

Some of his most recent publications feature his research on documentary film and the COVID-19 pandemic, Gustavo Adolfo Bécquer’s manuscripts, and ruin and spectrality in the Spain of the 1990s.

Egea is currently working on a manuscript on the visuality of the Spanish 2008 crisis. The book examines how the crisis itself becomes an image-producing event where affective mediation has arguably the same if not more weight in it than analysis, portrayal, or narration. With that in mind, cinema, still photography, and graphic novels are the media this project aims to fit into a larger process of crisis representation to ultimately reflect on the ontology of the image in the era of high neoliberalism.