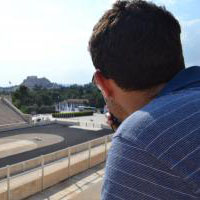 Roberto started his academic journey studying Social Work in the Universidad de Huelva and in the Universitat de Barcelona. After working on several city projects with the UHU and the Govern de Catalunya, his passion in social justice and literature led him to continue his studies at the University of Wisconsin-Milwaukee, where he earned an MA in Spanish Linguistics and Literature. During this period, he studied closely how the landing of the American market and ideology affected the socioeconomic and political ethos of México in José Emilio Pacheco’s Las batallas en el desierto. His areas of interest include Corruption, Politics and Economics in Modern Peninsular Literature, and Cultural Studies.